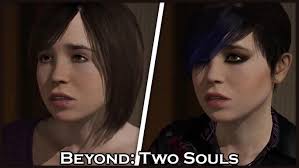 What lies beyond the afterlife? That is a question that has been asked by humans throughout the centuries. In Beyond: Two Souls, game designer and director David Cage poses the same question as he weaves a new narrative about the afterlife. The result is a personal, engaging emotional narrative that touches on loss and hope. Ever since young, Jodie Holmes has always been different. She can see spirits and move things around her due to a spirit entity named Aiden, who is connected to her body. Aiden cannot venture too far from Jodie, but she can command Aiden to move things or even possess people to do her bidding. Jodie is taken under the care of paranormal investigator Nathan Dawkins, who helps to nurture her powers and abilities. As she grows older, the government takes an interest in her powers and recruits her into the Central Intelligence Agency.

Jodie’s life doesn’t play out in a straightforward manner in Beyond: Two Souls. Instead, you jump between different points in her life in a nonlinear order, which is shown as a long timeline. As the timeline fills up with more completed chapters, the gaps between chapters generate intrigue about her past and present. For example, a much later chapter of Jodie’s life which sees her being hunted by the authorities is presented early in the game. Why is Jodie on the run? Likewise, is there a hidden motive behind Nathan’s eagerness to help Jodie? These questions are only answered much later in Beyond: Two Souls, once players are more accustomed to the controls and Jodie’s character.

Beyond: Two Souls‘ controls are more simplified and less obtrusive than Heavy Rain. Most action prompts now only show up as a white dot, so players just have to move their directional stick in the direction that makes sense. During fast-paced action or combat scenes, the action on screen will slow down, indicating to players to move Jodie in the direction that her arms or legs are facing. Likewise, when you are in control of Aiden, you can interact with items with blue dots by pulling or pushing the controller’s dual sticks. In later chapters, you can even use Aiden to see the last few seconds of a person’s life by guiding the spirit in the item or corpse to Jodie’s head. The game doesn’t do away with button or motion prompts completely – some combat and stealth action scenes may require players to shake the controller to break free from an attacker’s grip, or to take cover and shoot at enemies. Beyond: Two Souls’ controls are simple yet elegant, making interaction more intuitive.

The main actors of Beyond: Two Souls play their parts masterfully, especially Ellen Page who convincingly portrays Jodie as a young woman who is initially resentful of her powers and psychic connection to Aiden for robbing her of a normal childhood. Page brings Jodie’s character to life with her innocence and quiet determination along with a healthy side of rebelliousness, and it’s hard to imagine anyone else as Jodie. Equally exceptional is Willem Dafoe, who plays surrogate father to Page’s character. As a popular character actor, Dafoe brings warmth and compassion to his character Nathan, as well as a slight sinister quality to his overall personality. Actors Eric Winter and Kadeem Hardison do a solid job in supporting both characters’ roles. There are no weak performances here.

Also equally important to bringing Beyond: Two Souls to life is the game’s solid movement and facial animations. Quantic Dream motion captured both Page’s and Dafoe’s movements, and the result is outstanding. Some of the standout scenes in the game include Jodie heaving appearance upon fighting against the police, as well as shivering from the cold while begging for money from passersby. Their facial animations and details are equally impressive. The game’s side characters have noticeably less details to their faces and their movement animations can look a little stiff at times. But Beyond: Two Souls is still a great-looking game on the PlayStation 3, only surpassed by a few titles such as The Last of Us.

Once you’ve completed Beyond: Two Souls, there are a few incentives to replay chapters. Besides being able to play the game with a friend where one controls as Jodie while the other as Aiden, there are bonus contents such as design packs and behind-the-scenes videos, which are unlocked by finding bonus soul orbs that are hidden in some game chapters. There is also the appeal of seeing how things would play out differently if you chose a different course of action or response from your original approach, such as choosing to be cold to a group of teenagers during a party or taking action on your adoptive father before he leaves you at the facility. Some have a direct effect on the game’s ending, while others are more subtle. When compared to Quantic Dream’s previous work Heavy Rain, Beyond: Two Souls story and endings are arguably less complex, but they are stronger in its execution thanks to the smart script.

Who is Aiden? What are the dark creatures that leave scars on Jodie’s body? How did Jodie gain her powers? What lies beyond after death? These questions which are strewn throughout the narrative are answered throughout the course of Beyond: Two Souls, as the game slowly unpeels the layers of intrigue that permeates the whole narrative. Unlike the haphazard storytelling nature of Heavy Rain, Beyond: Two Souls’ story is a lot more focused and enjoyable. Beyond: Two Souls’ ending even sets up the pieces for a potential sequel, though Jodie’s personal journey is neatly tied up at the end. Beyond: Two Souls is an immersive, entertaining adventure from start to finish.